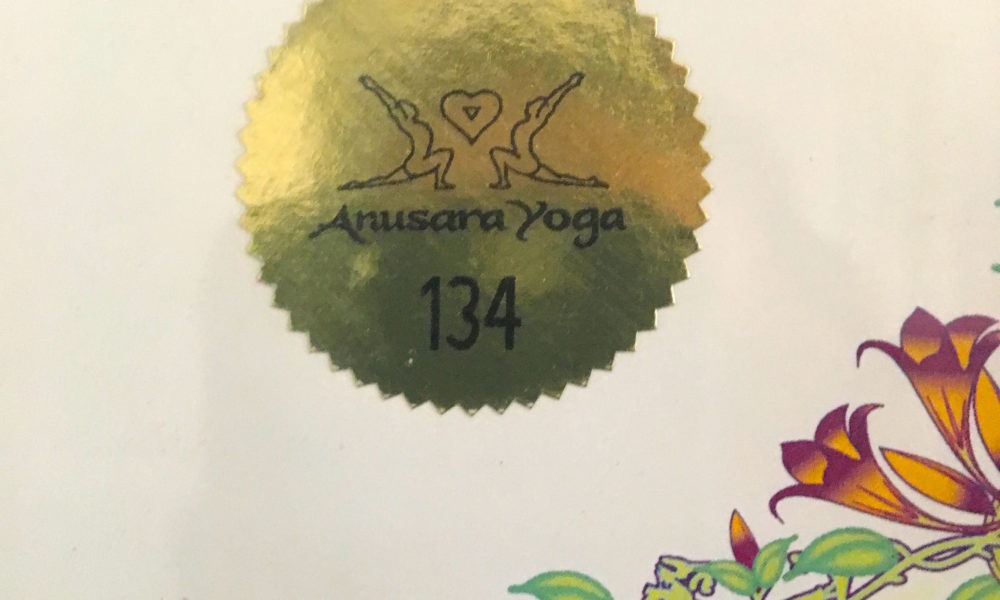 I don’t write or speak much publicly about my time in Anusara, but today is a day to do so. Today is both the anniversary of my certification in 2005, and near the very day I resigned in 2012. I’ve never marked it before or paid attention and for some reason this year, I am.

Certified teachers were numbered. Maybe just to keep count, but I do think to exemplify what JF saw as being the best, a way of showing the yoga sphere that Anusara teachers who had reached this pinnacle of achievement were rare, special, and highly masterful. I find funny now the inference that reaching certification somehow meant we were finished, knew all there was to know about yoga and the body, the practices, and all sorts of other details. There were plenty of problems with this as it set up elitism, a notion of excellence above others within the community as well as within the yoga community at large, and bred and fed narcissistic tendencies in its teachers.

But reflecting on it today, reaching that pinnacle of achievement meant something to me. I no longer consider it one of my greatest life achievements, nowhere near, but it did mark a period of growth from real true effort and investment in myself, and it counted. It felt like I counted (‘felt’ being the operative word since I later found out that I and my contributions really didn’t matter much to the organization or the founder). I was number 134, the 134th certified teacher in the world. At the time, that number felt huge. By the time AY fell apart and the exodus occurred in 2012 there were some 400 certified teachers, and that number quickly dissolved to around 80. Now there are around 100 certified teachers around the world. I guess that makes me old school, one of the originals, who could rap about good times.  When we were part of the peak, in some other life, which now feels long ago.

A lot has changed for me personally. Now free of the method for 5 years I feel exactly that: free. As an independent teacher of yoga I no longer abide by any schools guidance telling me how, or what to teach. I’m proud of my independence and I think I’ve stood fine on my own teaching people who want to be taught the path of yoga that takes introspection, physical work, clear technique, and are concerned with transitioning the insights from practice into daily living.  Resigning was one of my greatest achievements, actually.  Resigning set me on a deeper path of growth than I ever imagined. How else would I have been able to ask the deeper questions like what does yoga really mean to me? What do I think is truly important about the practice and techniques? What are the goals? What’s worked? What hasn’t worked? If I was going to continue teaching yoga, which I knew I was, I had to figure that out.

So this day marks a growth day, a day of change, the way any anniversary usually does.

I’m proud of my time in Anusara. I had a tremendously comprehensive and thorough training, one that I try and emulate and pull parts of into the Teacher Trainings I now teach under my own name. Yoga deserves that. Students of yoga deserve that. They deserve to be taught by teachers that are well versed in all aspects of yoga.

One positive side of the certification path is that it took time. For some, many years. That meant teachers weren’t off leading teacher trainings right after their 200 hour. They were teaching, continuing to gain experience, clarify their creativity and expressions, and their growth came from that. It had nothing to do with racking up hours for Yoga Alliance since Anusara had its own credentialing system, many many teachers (myself included) never went near Yoga Alliance. We didn’t have to. AY certification stood on its own as a mark of something. And it was a time when Senior teacher was honored, and experience actually mattered. I have tremendous respect for the teachers who came before me, taught me along the way while under that umbrella of practice.